I have been volunteering for West London Ping for a few years now. I hit balls with the beginners, I join in with the top table sessions and at the end of the evening I push tables (lots of tables) from the hall to their storage room…

I love it. There is literally nowhere I would rather be on a Friday evening… However, you can always do with a little extra assistance… Recently we added a little friend and helper to the Chelsea Academy. He’s a noisy little fella, has zero personality and he’s quite cold and ruthless when it comes to practicing with the kids, but they seem to like him or her for all that…

Opinion is divided among coaches as to how useful robots actually are. It’s no secret that even the best robots lack the variety and unpredictability of the average human player. Coaches rightly point out that matchplay is just not the same as endless repetitive patterns provided by a machine. These are valid criticisms, but there is another side to the argument.

Despite it’s limitations, the robot solves quite a few problems for a coach. First of all the robot doesn’t care how many times you miss or get a shot wrong. This is important for beginners. It’s not easy when you are starting out, particularly for very young children. It is daunting to go into a big hall on a Friday evening, where everyone seems to know what they are doing and every last player seems to be much better than you are. This is true even for sessions as friendly and inclusive as the ones that Jon and Maggie run.

It can be frustrating trying to find a practice partner when you are having trouble just keeping the ball on the table. The robot, however, doesn’t care about any of that. It will happily throw balls over the net for anyone to hit until it either runs out of ammunition or you switch it off. 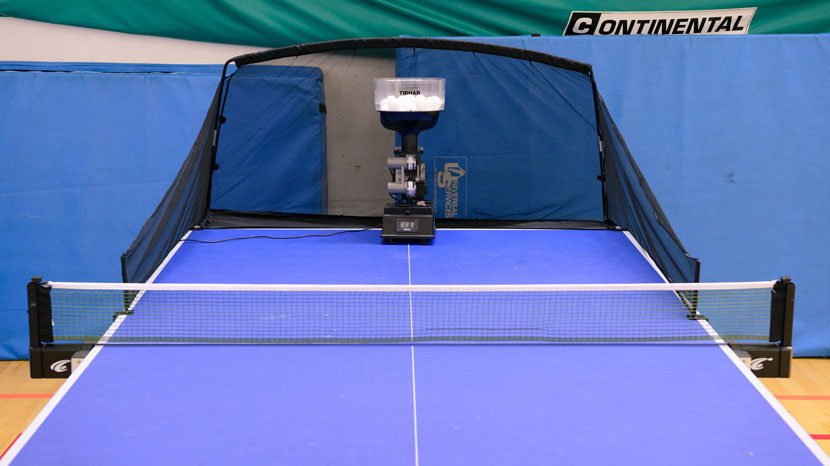 From a beginners point of view this is a real bonus. You simply get to hit lots of balls, and when you are starting out that’s the most important thing. It also frees the coaches up so that they can take a closer luck at the basic aspects of each player’s technique. This speeds up the process of eliminating bad habits.

As each child progresses the robot gets less and less useful, but it still has value. One of the most frequently neglected parts of the game is footwork and the robot can help most players out with this. It will spray balls from side to side of the table at increasingly fast rates and it doesn’t care how tired you are, it won’t stop. The side-to-side foot drills are probably the least enjoyed and yet most effective robot sessions we have.

Even intermediate players can benefit from the robots cold, patient attitude. Lots of players become lopsided in their abilities, favouring the forehand over the backhand, or vice-versa. This habit leads to their entire tactical approach being shaped around one side of the table. The problem with this is obvious. As you get better, so does the quality of your opposition. Anyone with a significantly weaker wing will find it being targeted mercilessly by their opponents. This leads to a vicious cycle. The more you try and protect the weaker side, the more lopsided your technique becomes.

In that situation, the robot can be used to go back to basics. A player can concentrate on rebuilding the weaker side, allowing them to bring their game back into balance. This has the benefit of being done at a player’s own pace. I have used this myself to try and improve my own weak backhand and it has worked.

Finally, the robot, despite its cold, mechanical personality, is a lot of fun. Kids always want to see how fast it can shoot balls at them. You can tell one child that their friend just hit ten cross-court forehands in a row and they will insist on doing eleven. Even refilling the robot has become a bit of a treat that players will fight over.

So, if you find yourself in Chelsea Academy on a Friday evening this Autumn, come and say hello to my little helper, because, despite his/her lack of personality he/she might just turn out to be one the best friends a player could make…