Players and coaches alike have had Sunday the 10th of November in the back of their mind for some time now. It signifies the first National League fixture for Richmond Park Table Tennis club. A long day of table tennis awaited our two squads and a chance to compete with the best London has to offer.

Both our Junior (U18) and our Cadet (U14) squads were off to a great start with strong wins for both sides. The Junior squad made up of Josh Gubby, Mo Larbi and Kian Kazemian played their first fixture against London Greenhouse East finishing 6-3 in our favour. Kian went undefeated winning all 3 of his games in convincing fashion with some fantastic attacking shots. The Cadet squad followed featuring William Wakefield, Orlando Smith, Matias Bonanomi and Oliver Longhurst followed suite and won their first game against the Greenhouse centre 4-2. William Wakefield had a strong opening performance taking a win from Greenhouse’s number one player in a tightly fought contest.

The Junior side had two remaining fixtures and unfortunately came out on the losing side in these. A tough 7-2 loss against Horsham Spinners, who went undefeated throughout the day, showed our boys what the standard of the very top teams in this league is. We followed this up with an agonising loss in a tightly contested fixture against London Greenhouse East, falling 5-4. It was a great opportunity for our young squad to learn. Josh still has two years of eligibility whilst Mo and Kian have another four years at this age group. Mo caused his opponents trouble throughout the day with his clever play whilst Josh showed a mental strength to win a tough game whilst playing through an injury. They have shown they can compete at this level and it will be exciting to see how they perform in this competition in years to come. 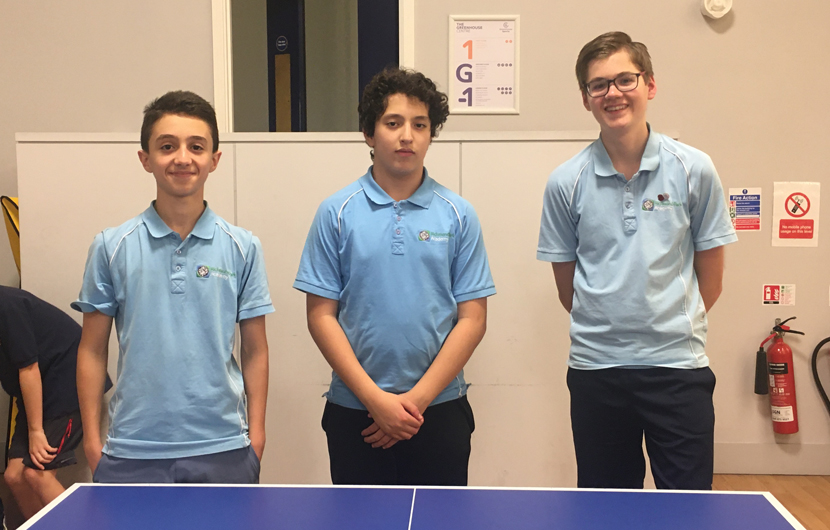 Our young cadets finished with a record of 3 wins and 1 draw. The second fixture against London Greenhouse East was certainly the most exciting fixture of the day. In a match where many believed us to be the underdogs our boys fought hard to claw back a 3-1 deficit to tie the match and earn a 3-3 draw. Matias recorded an upset win against their number 1 seed with one game going to a tantalising 22-20 score line. This win put us 3-2 down with a crucial final game. Oliver stepped up to the occasion and calmly won his fixture to secure the draw. The boys spirit was lifted and they carried this momentum into their next fixture against ‘The Oaks’ recording a comfortable 5-1 win. The youngest member of our squad, Orlando Smith, showed his potential picking up a win against a strong opponent and followed this up with a further two wins in our final fixture against Westminster. By this stage the boys were flying and finished the day with a 6-0 display.

A great opening day for our first National League appearance as a club. Lots to celebrate as individuals and as a collective team but more importantly it has given the players drive to work on specific elements of their game before the next set of fixtures on the 15th of December.