West London Ping achieved double gold at this weekend’s English Schools South Of England Table Tennis Championships held at Bournemouth and Bristol. Flying the flag for West London PIng were Ashburnham and Barnes Primaries. And in a measure of just how popular and successful table tennis has become in these two schools, both schools were represented by both their boys and their girls teams. That was an achievement in itself. Although both girls teams put up great performances, it was the boys this year who were to claim the top honours for their respective schools.

For the fourth successive year, Barnes Primary School reached the ESTTA National finals, and will be looking to add to their already impressive haul of four national team medals. Leading the charge this year was a very skilful determined squad of Under 11 boys led by Ed Gooze-Zijl and ably supported by Triston Kite, Cameron Jones, Mohamed Larbi and Qais Kamaraldin. Having already been crowned South London Champions, All-London Champions and now South of England joint champions, they will be hoping to go all the way and take the gold medal at the National Championships on March 25th at the Hinckley Leisure Centre in Leicestershire. The team has strength in depth so their hopes of reaching the podium could be well founded. The sun was shining in Bournemouth and in what proved to be a very tough group, the sun decided to shine on Barnes Primary School once again. After a shaky first round draw, the Barnes Boys stormed to two decisive victories to claim their place in the National Finals. For the Barnes Girls, so brilliantly led by Year 5 Annie Williams, it was to be close but not quite. Having comfortably won their first two matches, they had the misfortune of coming up against a really strong outfit and despite some super performances from Annie,Riva, Lauren, Hannah and Pippa, they just couldn’t get necessary wins. But they do get full marks for their heroic efforts throughout the day. 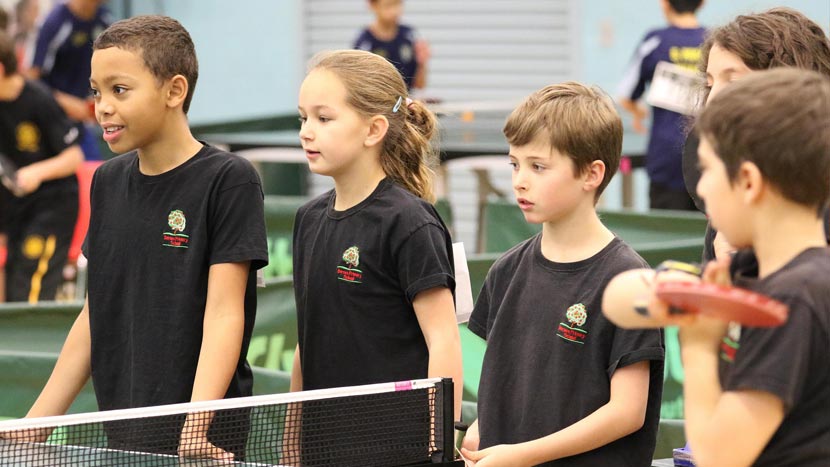 For the Ashburnham Boys, there was something even more important than qualifying at stake. Having reached the finals last year only to miss out on the gold medal by a single game, this group of boys, led by Harry Derecki, seemed determined to get back to the finals and have another attempt at reaching the summit. Supporting Harry throughout the day were Mohamed Kaba, William Nemeth-Anderson, Zayne Patel-Bhatti and the rapidly improving Uwab Younis. In fact, it is fair to say that the entire team has dramatically improved since their performance at the London Championships. Could it be that Harry’s professionalism is rubbing off on his team mates? It seems so. The Ashburnham Boys quickly warmed to their task, brushing aside teams from Buchinghamshire, Devon and Essex. Having lost and drawn with Barnes in the London Championships, Harry and the boys will be looking to take some revenge when they meet up in Hinckley in a few weeks time. As for the Ashburnham girls, this was their first really big tournament and they did themselves and their school proud, with some great performances from Hadil, Chanelle, Nyah, Ayan and Grace. Two close 5-3 defeats and a thrilling last round draw showed this group of girls that they can be competitive at this very demanding regional level.

Participating in the English Schools competitions is a great adventure, one which these young players will no doubt remember for years to come. For West London Ping participation is just as important – perhaps more important than winning. So to all those players from Barnes and Ashburnham, both those that made their school team and to those that didn’t quite make it, a huge round of congratulations for your enthusiasm and efforts over the past year. For both schools, it’s now a job of rebuilding, as the current crop of Year 6 students begin to turn their thoughts to their adventures at their new secondary schools. And remember, whatever school each student ends up at, West London Ping will welcome you back for training and National Junior League tournaments. If you like table tennis, this is just the beginning.

As always a special thanks to all the large contingent of parents that made the trip to Bristol and Bournemouth. Without your support nothing much can be achieved. And a massive thanks to Alvaro, Ben, Brian, Scott, Mark, Eamon and Maggie for your continued and invaluable support and enthusiasm. It’s always the behind-the-scenes work that is critical to a successful day. JK

Reminder: Round 3 of the National Junior League this Saturday 11th March, 9am, London Academy, Edgware.