It has been a highly successful season for the RBKC teams in the London Academy section of the National Junior League and that success continued with an emphatic win for the A team who, despite being slightly under strength due to No 1 Harry Derecki being on International Schools duty, still managed to go on to comfortably win Division 2 and return the team to the top tier of the tournament. Congratulations to Brandon Cann, Shahinur Islam and Marco Di Giammarino for their powerful individual and collective performances.

There was further successes throughout the season for Ed, Trishton, Mohammed, Qais and Cameron from Barnes Primary; and from Samuel OB, Samuel M, and Ezana from the Chelsea Academy, all of whom won divisional promotions and consolidated themselves as National League regulars. It was also very pleasing to see the ex-Fox girls, Nadia, Valentina and Louise all still playing competitively and doing so with such success, skill and determination. But perhaps the greatest success of the season for WLP/RBKC was the sheer size of the squad, with a regular turnout in excess of fifty players, many of whom were playing national tournaments for the very first time. 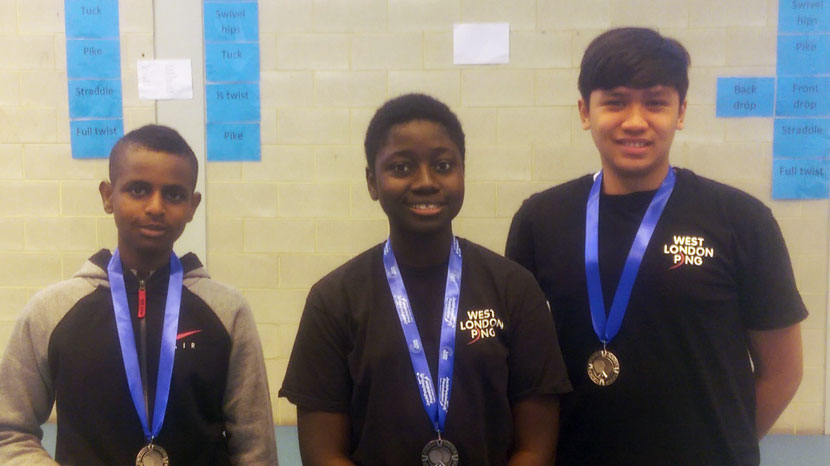 Due to the last round of the NJL falling in the middle of the Easter holidays, a number of RBKC regulars were unavailable, but that opened up opportunities for others to step in and they did so in great style. Ayub from Chelsea Academy, John from William Hogarth and Abdurahman from Ashburnham Primary all had their first taste of National Junior League table tennis, and all three showed much promise for the coming season. Although not available for this last round, special mention should also go to Francesco Bonato from Fox Primary and William Nemeth Anderson from Ashburnham, for some wonderful performances throughout the season.

As mentioned earlier, Ashburnham No1, Harry Derecki, had been selected to represent England in the ESTTA Six Nations Home International Schools Championships held this year in Wales, and I’m pleased to announce that Harry can now boast his very own international gold medal as England topped the tournament in grand style. Harry also reached the quarter-finals of the Individual tournament thereby establishing himself as a future force in English table tennis.

Although the NJL season is over, there are still a number of very important tournaments on the immediate horizon, most significant being the Jack Petchey Individual Championships on the 10th June at the UEL, and the annual London Youth Games in June and July. If you think you should be selected for the RBKC teams, you need to present yourself at the Chelsea Academy on Friday evenings for consideration. Last season both the RBKC boy’s and girl’s teams qualified for the finals and we hope to have similar success this year.

Training resumes at Chelsea this Friday 21st April. Best regards to all. JK