It was William Hogarth’s most successful table tennis performance to date, as no less than four Hogarth teams found themselves amongst the medals. In a day of many highlights in the second round of the National Junior League held at the London Academy in Edgware, the Hogarth squad of sixteen players certainly found their winning ways.

Highlight No1 arrived from the Hogarth girls who, led by Darcey and brilliantly supported by Ameiia, Yasmine and Quynh, stormed to a three point led in the Girls division to take the gold medal position ahead of two Barnes Primary teams and two London Academy teams. The second highlight came from Division 6 where John, Sam and Marcel swept to victory over teams from Twickenham, Barnes and the London Academy, dropping only two games for the entire day. And still the gold medal kept coming. 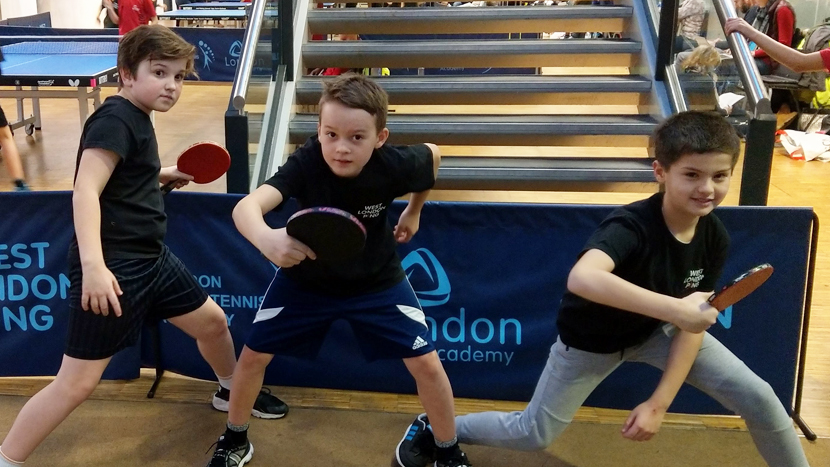 In Division 7B, the Hogarth team, consisting of Sam Q, Nasser, Dylan, Tamar and Maneeb amassed an impressive 19 points to take the title ahead of teams from Barnes, Ashburnham and the London Academy. Finally, in Division 7A, the Hogarth squad of Sacha, Jiahao, Toby and Ellis, put up a heroic struggle against players many years older than themselves to take the silver medals, missing out on the top spot by just two single games. In a day of so many wonderful moments, special mention must go to Ellis who came back from a 10-3 deficit to claim the match 16-14, and Sacha who defeated Brighton’s formidable No 1, Harry Fairchild.

It was a tremendous day of table tennis which was thoroughly enjoyed by parents and players alike. The huge squad of Hogarth parents certainly added to the atmosphere and undoubtedly aided the Hogarth teams in their titanic endeavours. Third round of the tournament will be on the 17th March at the same venue so there is plenty of time to practice and consolidate the gains already made. Community sessions continue at William Hogarth every Wednesday between 4.30 and 630. Parents are particularly welcome to participate.

Best regards to all. Jk